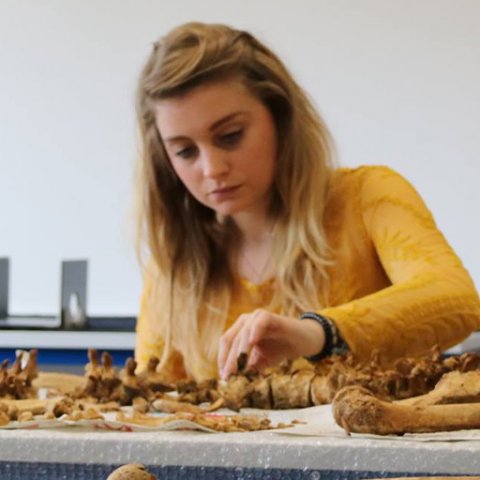 I am a PhD candidate at Université Libre de Bruxelles creating a bioavailable strontium map of Belgium by integrating a large dataset of plant samples. In September 2014, I graduated from Ghent University after completing my master's research on ritual Congolese swords and sabres (Mbele a Lulendo) which I helped excavate during fieldwork for the Kongo King project. During my studies at Ghent I undertook fieldwork in Belgium, Denmark, the Democratic Republic of Congo, and Italy and minored in Geography.

Hereafter, I pursued a premaster in osteology (September 2014 - February 2015) in order to study Human Osteology and Funerary Archaeology at Leiden University (February 2015 - September 2017). Here I specialized in dental non-metric traits and strontium isotope analysis of tooth enamel, which I applied in my master's research on a 5th to 4th century BCE population of ancient Satricum in central Italy to investigate an archaeological hypothesis which suggests a changed ethno-cultural identity as a result of migrating groups. From 2015 to 2019, I was in charge of the documentation and analysis of the osteological material excavated during the summer campaigns of the Mapping the Via Appia Project.